A Few Words About Theme 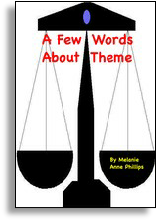 Read the first section for free:

Over the last twenty-five years, I’ve written thousands of articles on story structure and storytelling.  Here, I’ve gathered together a few of the best on the topic of theme.  I hope you find them illuminating in concept and practical in application.

Coming Apart at the Themes

Even when a story has memorable characters, a riveting plot and a fully developed genre, it may still be coming apart at the themes.

Theme is perhaps the most powerful, yet least understood element of story structure. It is powerful because theme is an emotional argument: It speaks directly to the heart of the reader or audience. It is least understood because of its intangible nature, working behind the scenes, and between the lines.

When mis-used, theme can become a ham-handed moral statement in black and white, alienating the reader/audience with its dogmatic pontifications. When properly used, theme can add richness, nuance, and meaning to a story that would otherwise be no more than a series of events.

In this article, we’ll separate the elements of theme by their dramatic functions so we can understand the parts. Then we’ll learn how to combine them together into a strong message that is greater than the sum of the parts.

What do we really mean by the word, “theme?” In fact, “theme” has two meanings. The first meaning is not unlike that of a teacher telling a class to write a theme paper. We’ve all received assignments in school requiring us to express our thoughts about “how we spent our summer vacation,” or “the impact of industrialization on 19th century cultural morality,” or “death.” Each of these “themes” is a topic, nothing more, and nothing less. It functions to describe the subject matter that will be explored in the work, be it a paper, novel, stage play, teleplay, or movie.

Every story needs a thematic topic to help hold the overall content of the story together, to act as a unifying element through which the plot unfolds and the characters grow. In fact, you might look at the thematic topic as the growth medium in which the story develops. Although an interesting area to explore, the real focus of this article is on the other element of theme.

This second aspect of theme is the message or premise of your story. A premise is a moral statement about the value of or troubles caused by an element of human character. For example, some common premises include, “Greed leads to Self-Destruction,” and “True love overcomes all obstacles.”

A story without a premise seems pointless, but a story with an overstated message comes off as preachy. While a premise is a good way to understand what a story is trying to prove, it provides precious little help on how to go about proving it.

Let’s begin by examining the components of “premise” and then laying out a sure-fire method for developing an emotional argument that will lead your reader or audience to the moral conclusions of your story without hitting them over the head.

A Main Character’s moral dilemma may be a huge issue, such as the ultimate change in Scrooge when he leaves behind his greedy ways and becomes a generous, giving person. Or, the dilemma may be small, as when Luke Skywalker finally gains enough faith in himself to turn off the targeting computer and trust his own instincts in the original Star Wars movie (Episode IV). Either way, if the premise isn’t there at all, the Main Character will seem more like some guy dealing with issues, than an example in human development from whom we can learn.

Traditionally, premises such as these are stated in the form, “This leads to That.” In the examples above, the premises would be “Greed leads to Self Destruction,” and “Trusting in Oneself leads to Success.” The Point of each premise is the human quality being explored: “Greed” in the case of Scrooge and “Self Trust” with Luke.

We can easily see these premises in A Christmas Carol and Star Wars, but what if you were simply given either of them and told to write a story around them? Premises are great for boiling a story’s message down to its essence, but are not at all useful for figuring out how to develop a message in the first place.

So how do we create a theme in a way that will guide us in how to develop it in our story, and also sway our audience without being overbearing? First, we must add something to the traditional “This leads to That” form of the premise. Beside having a thematic Point like “Greed” we’re going to add a Counterpoint – the opposite of the point – in this case, “Generosity.”

Arguing to your audience that Greed is Bad creates a one-sided argument. But arguing the relative merits of Greed vs. Generosity provides both sides of the argument and lets your audience decide for itself. Crafting such an argument will lead your reader or audience to your conclusions without forcing it upon them. Therefore, you will be more likely to convince them rather than having them reject your premise as a matter of principle, making themselves impervious to your message rather than swallowing it whole.

We hope you have enjoyed this preview section

A Few Words About Theme