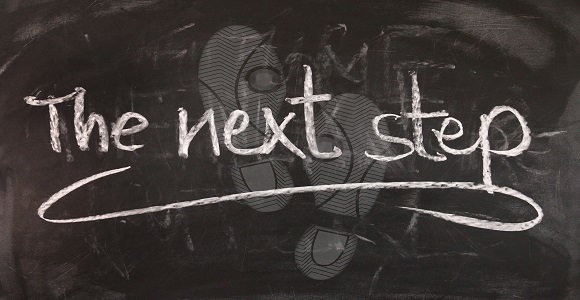 Here are some general guidelines to help you structure your story's plot, step by step.

The beginning of act one is the teaser. It may or may not have anything to do with the actual plot of the story. This is where you get the feel of the story and the feel of the main character. A good example is in Raiders of the Lost Ark. In the very beginning Indiana Jones replaces a statue with a bag of sand and then gets chased through a lot of booby traps. This actually has nothing to do with the story to come, but it sets the tone and grips the audience.

The middle of act one is the set up of the situation and goal. Even though you should reveal the goal in this section, you don't need to have the protagonist accept the goal.

If your goal requires a lot of preparation before starting on the quest, then you might want to have the acceptance of the goal by the end of this section and the preparation in the next section.

In contrast, if your protagonist needs to think or do something before accepting the goal and/or there is no preparation needed for the goal, then the acceptance of the goal can happen in the end section of the first act instead.

By the end of this section everything should be ready to embark on the quest. All preparation, all acceptance is completed. Just as when you are going on vacation you turn off all the lights, pet the dogs, lock the doors, put the suitcases in the car, get in the car, put on your seatbelt, start the car and drive off out of sight... all this is the first act. The second act begins with the car on the road.

This section presents the beginning of the quest. It is the start of the actual journey. In many stories, this is an upbeat or at least hopeful time. Everything goes as planned. Keep in mind that throughout act two the difficulties in achieving the goal are constantly increasing. This is the section before that starts to happen; when it seems as if the journey will be a piece of cake.

This is possibly the most important section you will write. It is the midpoint, the exact middle of your story.

Act two has in it, either in the this second or the end section, a special problem, often called a "plot twist." The stakes are raised in an unexpected form, and in so-doing the whole picture is changed.

In an action story it will change what the characters think they need to do and make the goal more difficult to achieve. In a character piece, this problem makes it more difficult to resolve their personal problems; it complicates them. 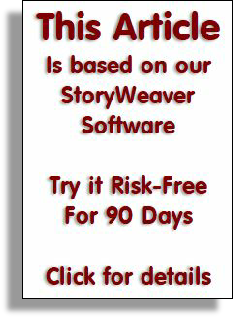 Now don't let the name fool you, a whimper can be very effective. As an example, suppose in the middle of Act Two a natural disaster occurs as the Plot Twist bang. All the food the group has with them is scattered to the winds. After this disaster, all the food that can be found must be found.

The end section of act two in this story would involve finding the food, patching bags, rounding up lost horses, fixing what's broken and so on, recovering. At the very last, everything is ready to go, and the man who is carrying the food sees a last grain of rice on a rock, picks it up, drops it in a bag, gets on his horse and leaves.

That moment with the single grain of rice is the whimper. It ends the act with a subtle sense of closure and the anticipation that Act Three will begin with a new sense of purpose for the characters.

Act three is the buildup to and, of course, the climax itself. All the plot points in the story have been set up in the first act, developed in the second, and the third act is where everything comes together for better or for worse.

If you put the twist at the end of the second act, then it dropped like a bombshell and changed the whole purpose of what the characters are trying to achieve. In this case, act three begins with the characters setting off in a whole new direction than at the beginning of the quest.

Either way, the reader/audience should be made to know that this is the start of the final push toward the ultimate climax or reckoning.

Throughout the story, although the Protagonist and Antagonist may have come into conflict, there have always been extenuating circumstances that prevented an ultimate conflict. In the middle of act three, these circumstances are dismantled, one by one, until nothing more stands between these two principal characters.

At the end of this section it is clear that a final face-off is inevitable.

This is climax of your story. It is where the antagonist and protagonist meet for the final conflict. Your entire story has been leading up to this moment, with rising tension and suspense. All the stops are removed and the momentum cannot be turned aside.

When the Protagonist and Antagonist meet, they start with the small stuff, sizing each other up. This is true whether it is an action-oriented story or a character study. The dynamics are the same - only the weapons they use are different.

In action stories there will be physical weapons. In character stories, the weapons will be emotional. In stories about a single character grappling with personal problems, his or her demons come to bear, slowly but directly, building to the final breaking point.

In all kinds of stories, this section builds as the two camps (and their followers) pull stronger and stronger weapons out of their arsenal, since the smaller ones have proven ineffective.

The battle quickly becomes more heated, more imperative, and riskier. Eventually both the antagonist and protagonist have employing all the weapons they have at their disposal except one. They each retain a trump card, one last weapon that they have not yet used for fear that it might backfire or take them down along with their opponent. With the use of this last weapon the battle will be decided, one way or another.

The final moments of the ending of act three might take one of two directions:

1. The weapon (physical or emotion) is employed and the results are seen as the smoke clears.

2. The weapon is employed and the result is left in limbo until the conclusion (epilog, dénouement or "wrap-up")

The conclusion is the aftermath and epilog. The climax is over and it's time to take stock of all that has happened. The conclusion is both a cool down period for the reader/audience after the excitement of the climax and a wrap up of loose ends.

How did it all turn out? What was gained and what was lost? Was the effort to achieve the goal successful or not. Or, what the Goal only partially achieved, and was it enough?

In a sense, the conclusion is a new "set-up." Just as the opening of your story set-up the way things are when the problem begins, the conclusion sets up how things are, now that it is over.  What kind of new situation has come into being through the changes wrought by the climax?

Now your plot (and your story) have come to an end.  And as you have seen, while every plot has it own unique twists and turns, there are always touch points to a common dramatic progression that can guide you all along the way.