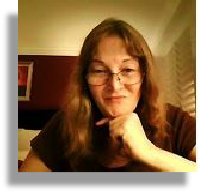 Melanie Anne Phillips is the creator of StoryWeaver, co-creator of Dramatica, founder of Storymind, and the author of books, articles, videos, and audio programs on creative writing, story development, story structure, and narrative in the real world.

Melanie grew up in Burbank, California - home to Warner Brothers and Disney , with Hollywood just over the hill.  So, it isn’t surprising that what she wanted for her graduation present from elementary school was a movie camera.

Her first interest was  setting up “trick shots” such as time lapse, animating inanimate objects, forced perspective, and image warping, all of which were challenging using a first generation Super 8 movie camera.

After having created a number of short experimental films, one of her works won Honorable Mention in the Kodak Teenage Movie Awards, bolstering her interest in the medium and leading her to enter the University of Southern California as a Cinema Major.

Upon leaving college, Melanie went to work in the film industry writing, producing, editing, and directing a number of films and videos including music videos, television commercials, including directing two feature length entertainment films, one of which became a cult classic horror picture in the 1980’s.

In the early 1990’s, Melanie and her creative partner Chris Huntley whom she had met while at USC, developed a new theory of narrative structure later named Dramatica.  When their model of narrative had become  detailed enough to present, Chris and Melanie  unveiled it for Chris’ business partner, Stephen Greenfield.  The result was a three year project at their company, now called Write Brothers, in which Melanie and Chris refined the theory and  Stephen programmed the interactive Story Engine at the heart of the Dramatica software, based on the narrative model.

Since then, Dramatica has been employed on motion pictures, novels and stage plays  including those from many well-known and award winning creators of highly successful and popular entertainments.

Melanie formed her own company, Storymind, in 1997 with the primary purpose of expanding the theory into the underlying narrative psychology of the human mind.  In 2012, Chris and Melanie were contacted by government intelligence agencies about applying their narrative model for counter terrorism by better understanding the drives, goals and responses both of lone wolves and of terrorist groups.

This four year project ultimately led to a fully developed model of narrative psychology that has now been employed by several government agencies, advertising agencies, sports organizations, and Fortune 500 companies.

Today, Melanie continues to refine the theory and also pursues her own life-long creative efforts as a photographer, composer of music, and author of many books ranging from tomes on story structure and storytelling to a series of trilogies about her personal life, experiences, philosophies, and speculations.

After many years away, Melanie has returned to Burbank to spend more time with her children and grandchildren.

Browse all Melanie’s Books through her Author Page on Amazon.com